Undergraduate research by students in MUSC 305

Purpose of the Research with a Sample (Spring 2015)

The music collection of Mrs. Hughes is extensive, and students have worked to research selected pieces from the collection, providing background and interesting details.

Here is a sample paper along with the sheet music digitized into pdf format.

Ah! What is the Bosom's Commotion 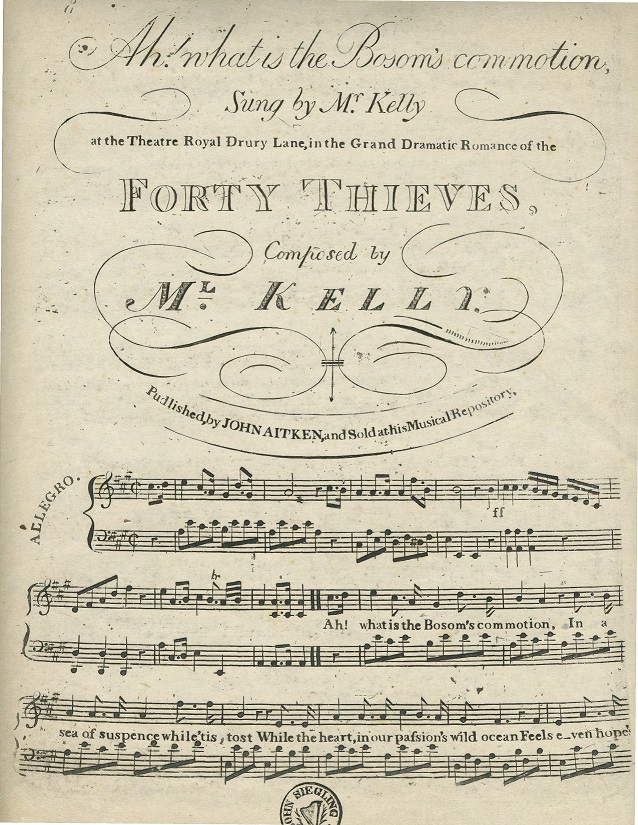 About the author - Matt Kelly

Mr. Kelly's paper won the Douglas K. Gordon Award in 2015 and he presented it during the Paideia Conference.

Mr. Kelly is currently working toward a Master of Sacred Music degree at the University of Notre Dame.  (November 2015)

Stealing the Opera in the Georgian Era:
Tracing Michael Kelly and the Forty Thieves

The Josephine L. Hughes Collection (JLH) is home to rare American music, providing a glimpse into the musical life of the American parlor in the South. One might be surprised to discover the Georgian era opera aria, "Ah! What is the Bosom's Commotion" from The Forty Thieves by Michael Kelly in the collection. This song provides a point of departure into the life of a musician and a period of music that has almost entirely escaped academic attention. A prolific composer, performer, producer, and publisher at the famous Theatre Royal Drury Lane, Michael Kelly's contribution to opera in the Georgian era deserves attention.

Drawing upon Kelly's memoirs and clues found in the score, this paper pieces together the history of the aria from its inspiration and performance through its printing and arrival into an American collection. The work's premiere coincides with a period of great mourning in Kelly's life, which I argue is expressed in the drama of the aria. Furthermore, based on first person accounts of Kelly's singing, I demonstrate how he used various compositional techniques to highlight his own vocal strengths. Finally, I situate the score in the context of music publishing in the Georgian era and suggest that the copy of "Ah! What is the Bosom's commotion" contained in the JLH Collection is likely a bootleg version printed down the street from Kelly's own shop. Developing upon Girdham's work on Kelly's predecessor, Stephen Storace, this paper provides academic entry into one of Georgian opera's most active men.

Read the full article below.